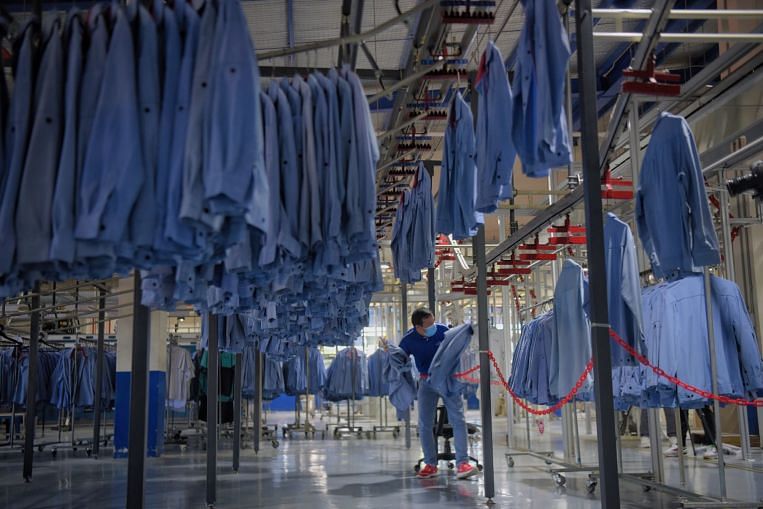 What to do with 33,000 old uniforms? SingPost turns them into bags, rugs and more, Singapore News & Top Stories

Thousands upon thousands of blue long-sleeved shirts – identical in style but different shades due to varying degrees of wear – hang on shelves at an industrial laundromat in Woodlands.

For years, these clothes had traveled all over Singapore (some probably made it to your home). Now they are here to find a new lease of life.

A year ago, the Singapore postal service provider gave its uniforms a makeover for more than 1,000 employees. Almost 12 tonnes of uniforms were returned and replaced with more colorful ones.

Some 33,000 old SingPost uniforms, including cargo pants, windbreakers and raincoats, would have gone into the trash without a new recycling effort launched last Saturday. They would be made into tote bags, picnic mats and more.

The project, however, was a huge logistical undertaking.

First, the uniforms had to be collected and sorted.

These two SingPost employees wearing the new SingPost uniforms were among the many who worked, carrying bags of old uniforms to be sorted at the SingPost Tampines regional base, the collection point for old uniforms collected from six different bases around the island.

They included used and unused uniforms returned by letter carriers.

For four weeks, 13 SingPost employees unpacked the boxes and sorted the uniforms into similar groups.

Those that needed washing were packed in boxes and bags before being loaded onto roller cages, which were then transported to an industrial laundromat.

Old uniforms still wrapped in plastic and not needing washing were sorted into boxes and stored waiting to be reused.

The uniforms were taken to Systematic Holdings, an industrial laundromat in Woodlands, where 4410 kg of uniforms were washed and dried within seven days.

The uniforms were hung up and transported through a steam tunnel at a temperature of up to 150 Â° C. He removed the wrinkles from the clothes.

Small parts of uniforms, such as collars, were ironed manually by employees.

Finally, the conveyor transported the uniforms halfway through the warehouse until an employee manually sorted them by size and fabric type.

From the laundromat, the uniforms were then sent to SingPost’s three partner social enterprises to design and reuse the clothes.

Ms. Rabiatuladawiyah and the team used a template to cut the uniforms to size, then sewed the seams together. (In this photo, she’s working on a lunch bag.)

They managed to use all parts of the uniforms – the sleeves were made into wine racks, the shirt collars became toilet roll holders, and the sleeve ties were used as handles for both products. .

The third social enterprise that SingPost has partnered with is Our Barehands, which aims to provide artisans in Singapore and beyond with more sustainable livelihoods by working with them to create and sell a wide range of clothing.

In total, five items from the Standard Factor Kit – shirt, cargo pants, white t-shirt, windbreaker and raincoat – were creatively transformed into 12 different products as part of SingPost’s Re: Post project, which has was launched last Saturday (October 9).

Products are on sale at 15 selected post offices and all philatelic shops, as well as SingPost’s online store and mobile app.

All proceeds will be donated in full to the South West Community Development Council in support of its South West Caregiver Support Fund and its Meal Service @ South West.

Skip the wait to download Windows 11: How to get Microsoft’s new operating system now