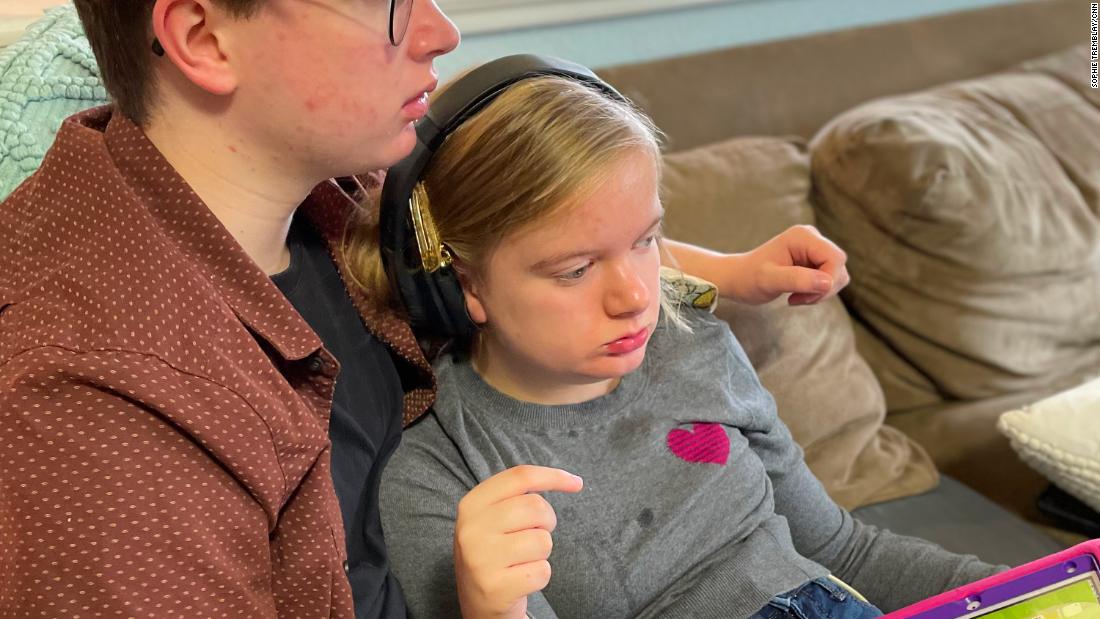 Texas teen couldn’t talk to his sister, so he created an app to give her a voice

Della suffers from Bainbridge-Ropers syndrome, a rare genetic disorder that affects her ability to eat, move and speak.

â€œI never grew up with a neurotypical sibling, so that comparison is hard for me to make,â€ Archer, 17, told CNN. “But I’ll say she’s definitely very opinionated. If things aren’t quite going her way, she’ll let you know.”

Della, 14, grew up using a combination of hand signals and short sounds to communicate with her family and caregivers. In her early teens, she was introduced to Augmented and Alternative Communication (AAC) applications, programs designed to help people with speech or language problems. But her family were disappointed with the results.

â€œI had really imagined her speaking in sentences and thinking that she was going to tell me how wonderful and grateful she was for all that we do for her. But it wasn’t like that at all,â€ Caitlan said. Calder, Della’s and Archer’s Mother.

Della refused to use the first app they tried, then broke the second device they bought her.

The cost of trying different AAC apps to see which worked best for Della began to weigh on the family. Some applications can be very expensive, with some hardware devices costing several thousand dollars.

Archer felt it was unfair that the ability to communicate, something he believed to be fundamental to being human, forced families like his to make financial sacrifices.

â€œShe wants to communicate like everyone else. And imagine how difficult it would be if you couldn’t communicate by talking to people,â€ he said.

So Archer began to use his coding skills to develop a web application called Freespeech. The site is accessible from any device – phones, tablets and computers – with Internet access. The simple website allows users to program buttons with images of their choice to represent words. When you click on it, the word is spoken aloud.

Unlike many other AAC apps, Freespeech’s buttons are easily editable, a feature Archer deemed essential to how Della wanted to communicate.

“Della’s interests come and go. We need to be able to add buttons for all of the ‘Clarence’ characters and add all of the ‘Addams Family’ characters and then take them out when she loses interest,” said Chad Calder, the father. by Della and Archer. , referencing Della’s favorite TV shows. â€œThese are the things she wants to talk about.

While there was still a learning curve for Della to start using Freespeech, it didn’t take long for the Calder family to notice a change in how Della was able to communicate with them.

â€œIn the past when we had to go shopping we would just take her, she was never really consulted,â€ Chad told CNN. “[Freespeech] really helped bring her more into the conversation and more into the dynamics of our family. “

The family say it also helped them discover more of his personality.

Della’s current interests include the dynamic between good kids and bullies, different types of school buses, and having her brother draw temporary tattoos of his favorite cartoon characters on his arm. She also enjoys listening to the Beach Boys.

Free for everyone to use

Archer made his website free for everyone and posted it on GitHub, a code hosting platform for open source software.

Using GitHub, Archer was able to connect with other coders who contributed their code to add different features to the project.

â€œFor example, Della is really mischievous. She goes into the app, and she wants to delete everything and edit everything, so I realized we needed a password feature,â€ Archer said.

After posting their requirements to GitHub, a group of coders were quickly able to create a password option in Freespeech.

Archer also took to TikTok to release his new app, hoping it might reach other families like his who might find it useful. The response has been overwhelming.

â€œWhen I first made my first video, I expected it to only get a few hundred views. And when she got a million views, I got a lot of comments congratulating me … I kind of got that feeling of impostor syndrome. Said Archer. “The good thing is … it got a lot of attention on the project and I had a lot of contributors who wanted to contribute their code.”

The story has also resonated with many in the medical field who work with patients with illnesses similar to Della’s.

â€œI am a neurologist working with people with neurodegenerative diseases that cause speech problems. I think this could be helpful for my patients. Great job,â€ wrote a commentator in response to Freespeech.

Tommie Robinson, the division chief of hearing and speech at Children’s National Hospital in Washington, DC, welcomed the idea of â€‹â€‹a new communication tool in the area of â€‹â€‹AAC applications.

â€œAdditions to accessibility and individualization are badly needed, and devices like an app can play an important role in improving the communication process,â€ Dr. Robinson told CNN.

For Archer, Freespeech is still a work in progress. He is currently working on plans to make the software available without an internet connection, which he sees as a drawback.

He said he was motivated to continue working on the project, not only for Della, but by the dozens of people who have since contacted to share how the app has helped their own families.

â€œI remember an email. It was a parent talking about a kid who was about my age at the time, who got to talk about his special interests and his favorite video games for the day. first time thanks to the app … It meant that through my efforts I was able to help give voice to someone else, “Archer said.” I was very proud of it. “

Create a website to show off your game moves