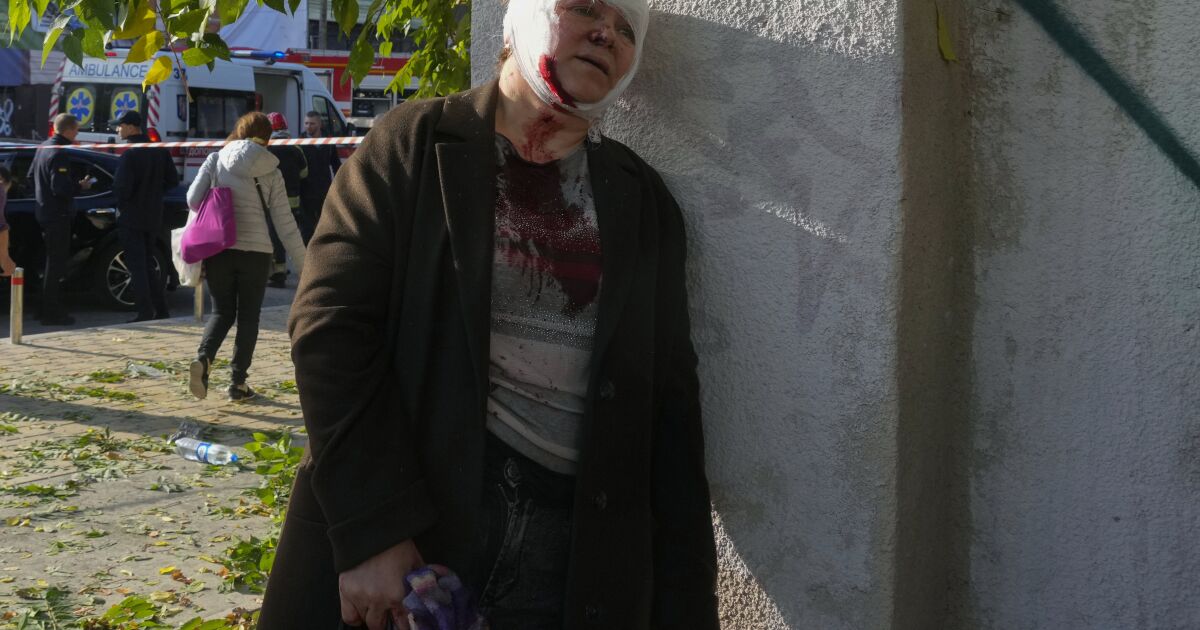 Russia blasts Kyiv and other Ukrainian cities in deadly strikes

Russia unleashed a deadly barrage of strikes on several Ukrainian towns on Monday, destroying civilian targets, including downtown Kyiv, where at least six people were killed amid burned cars and destroyed buildings. The assault brought the grim reality of war back into focus after months of easing tensions in the capital.

Ukraine’s emergency services said at least 11 people were killed and 64 injured across the country in the morning attacks – the largest and most widespread since the early days of the war. Although some missiles apparently targeted energy installations, others struck civilian areas.

Russian President Vladimir Putin said the strikes were in retaliation for what he called Kyiv’s “terrorist” actions – a reference to Ukraine’s attempts to repel invading forces from Moscow, including an attack the weekend on a key bridge between Russia and the annexed Crimean peninsula.

Putin has promised a “tough” and “proportionate” response if Ukraine carries out further attacks that threaten Russia’s security.

“No one should doubt that,” he said.

Monday’s intense assault, which lasted for hours, marked a sudden military escalation in Russia’s assault on Ukraine. It came a day after Putin called Saturday’s explosion at the huge bridge linking Russia with its annexed territory of Crimea a “terrorist act” orchestrated by Ukraine’s special services.

Putin, speaking in a video call with members of the Russian Security Council, said the Russian military had launched ‘precision weapons’ from the air, sea and ground to target key energy facilities and military command.

But the sustained barrage on major cities has hit both residential areas and critical infrastructure, pointing to a major surge in the war amid a successful Ukrainian counteroffensive in recent weeks.

The missile strikes marked the largest and most widespread Russian attacks in months. Putin, whose partial mobilization order earlier this month sparked an exodus of hundreds of thousands of fighting-age men from Russia, refrained from declaring martial law or a counter-terrorism operation as many had expected .

Moscow’s war in Ukraine is approaching its eight-month milestone, and the Kremlin is reeling from humiliating battlefield setbacks in the parts of eastern Ukraine it is trying to annex.

Explosions hit the capital’s Shevchenko district, a large area in the center of the city that includes the historic old town as well as several government offices, Mayor Vitali Klitschko said.

Some of the strikes hit near the government quarter in the symbolic heart of the capital, where the parliament and other major landmarks are located. A glass tower housing offices was badly damaged, most of its blue-tinted windows blown out.

Residents were seen on the streets with blood on their clothes and hands. A young man sat on the ground while a nurse wrapped a bandage around his head. A woman with a bandaged head had blood all over the front of her blouse. Several cars were damaged or completely destroyed. Air raid sirens sounded repeatedly across the country and in Kyiv.

The General Staff of the Armed Forces of Ukraine said 75 missiles were fired at Ukrainian targets, 41 of which were neutralized by air defenses.

The targets were civilian areas and energy facilities in 10 cities, Zelenskyy said in a video address. The Russians “purposely chose such a time and such targets to inflict the most damage,” Zelenskyy said.

The morning strikes sent Kyiv residents into bomb shelters for the first time in months. The city’s subway system halted rail services and made stations available again as places of refuge.

As air raid sirens continued throughout the war in cities across the country, in Kyiv and elsewhere, many Ukrainians began to ignore their warnings after months of calm.

That changed Monday morning. The bombings hit Kyiv at the start of the morning rush hour as commuter traffic began to pick up. At least one of the vehicles hit near Kyiv National University appeared to be a commuter minibus, known as a “marshrutka”, a popular alternative to the city’s bus and metro lines.

Nearby, at least one strike landed in Shevchenko Park, leaving a large hole near a children’s playground.

Among the targets hit was the Klitschko Pedestrian Bridge, a central Kyiv landmark with its glass panels. CCTV footage shared by an adviser to Ukraine’s interior minister showed a huge explosion when the bridge was hit. A man was seen running away after the explosion.

Ukraine’s emergency service said the strikes left four of the country’s regions – Lviv, Poltava, Sumy and Ternopil – completely without power, while across the rest of Ukraine power outages were spotty.

Associated Press reporters in Dnipro saw the bodies of several people killed at an industrial site on the outskirts of the city. Four people were killed and 19 injured in the town, local officials said.

Witnesses said a missile landed in front of a bus during the morning rush hour. Despite heavy damage to the vehicle, officials said no passengers were killed.

Natalia Nesterenko, a mathematician, said she saw a missile pass the balcony of her apartment in Dnipro as she worked in her kitchen. Then she heard two explosions.

“It’s very dangerous. I immediately called my children to see how they were doing because anyone can be affected. Women, children,” she said.

Ukrainian media also reported explosions in a number of other locations, including the western city of Lviv, which served as a refuge for many people fleeing fighting in the east, as well as in Kharkiv, Ternopil, Khmelnytskyi , Zhytomyr and Kropyvnytskyi.

Three cruise missiles launched against Ukraine from Russian ships in the Black Sea have passed through Moldova’s airspace, the country’s Foreign Minister Nicu Popescu has said.

The Kerch Bridge to Crimea is strategically important to Russia as a military supply line for its forces in Ukraine and symbolically as an emblem of its claims to Crimea. No one has claimed responsibility for damaging the 19 kilometer long bridge, the longest in Europe.

The attacks prompted a new wave of international condemnation of Russia.

German Chancellor Olaf Scholz’s spokesman, Steffen Hebestreit, said the Group of Seven industrial powers will hold a video conference Tuesday on the situation to which Zelenskyy will respond. Germany currently chairs the G-7.

“Russia has once again shown the world what it stands for. This is terror and brutality,” European Commission President Ursula von der Leyen said.

Some feared Monday’s attacks were just the first salvo in a new Russian offensive. The Ukrainian Ministry of Education has announced that all Ukrainian schools will go online at least until the end of this week. Ukrainian Foreign Minister Dmytro Kuleba interrupted his tour of Africa and returned to Ukraine.

In an ominous move, Belarusian President Alexander Lukashenko announced on Monday that he and Putin had agreed to deploy a joint “regional grouping of troops” amid escalating fighting in Ukraine. He gave no details.

Lukashenko has repeated his claims that Ukraine is planning an attack on Belarus, sparking fears the stage may be set for pre-emptive action from Minsk.

Sabra Ayres in Kyiv, Vasilisa Stepanenko in Kharkiv, and Justin Spike and Yesica Fisch in Dnipro contributed to this story.

‘Murder, She Wrote’ and ‘Beauty and the Beast’ star Angela Lansbury dies at 96