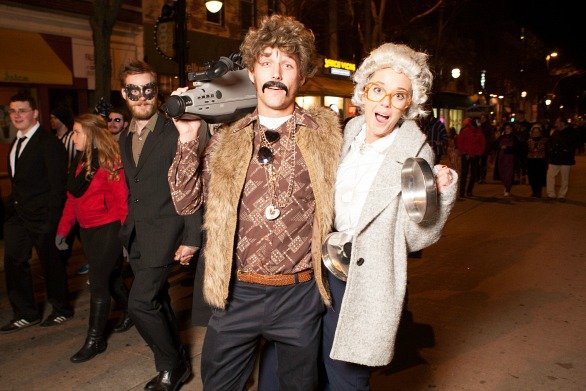 The city recently announced that the Halloween Freakfest celebration on State Street has been canceled for the third year in a row. The last two cancellations were due to COVID, but this one could spell the end of the event.

As the mayor who started Freakfest, you might think I would personally invest in it and oppose its apparent demise. Not really. These things run their course. In its day Freakfest was cool. But as things age, they become less fashionable. I am 63 years old. Trust me. I understand.

Because history repeats itself, let me suggest some. When I took office in 2003, the annual party on State Street was more or less spontaneous, disorganized and increasingly dangerous. Tens of thousands of people showed up to show off their costumes. While it was mostly fun, the parties ended in bad behavior. In fact, the year before I became mayor, the event ended with a group of revelers lighting bonfires in the street and bombarding police with bottles and other items.

In 2003, we increased the police presence and I came downtown to walk the streets. I could sense some tension in the crowd – there was jostling – but then a cold rain started and I headed home confident that everything would be fine. But my phone rang at 2 a.m. and then-police chief Richard Williams told me his cops had just deployed pepper spray to disperse an unruly crowd. I got out of bed and drove downtown to walk down the street again. Windows had been smashed. It looked worse than it was, but it wasn’t great.

So in 2004 and 2005 we tried different strategies. We brought big lights, worked with student groups to sponsor costume contests, gave away free food and did everything we could think of to try and turn the event into a bacchanalia in healthier activities.

And none of that worked. Every year the same thing happened. A group of revelers massed on the 500 block around closing time for the bar (which was delayed an hour thanks to the end of daylight saving time that night) and started jumping and singing in a circle. Fearing a riot like the events of 2002 and 2003, the police intervened to disperse the crowd. It was an ugly scene eagerly covered by the television news. It made for some great footage, which local stations would broadcast for weeks before the following year’s event. It was like an advertisement. Halloween in Madison. Come for the costumes. Stay for the riot!

In 2006, I was as fed up with it as most of my constituents. The incremental changes we had tried weren’t doing the trick. Something drastic had to be done. Closing down a public street and charging to enter was certainly drastic.

That first year was a white fist bump. My staff worked with a group of volunteer publicity professionals to mark the “Freakfest” event. The idea was to make it a music festival with costumes. We couldn’t get a music promoter to touch it, so Bridget Maniaci, who was an intern student in my office and later an alder from Madison, booked the bands. The Parks Department has stepped up ticket sales from a trailer. City Engineering has designed some ingenious soft barricades that would help us control access without hurting anyone if stormed. A private security company we hired was released on bail at the last minute, so we had to scramble to get city employees to fill the role. My assistants Joel Plant and Mario Mendoza oversaw the whole thing and were on the streets all night reporting to a command center we had set up in the Water Utility conference room a few miles away.

As we got closer to the date, all kinds of people and groups were making public statements and emailing me to cover their butts. If things went south, that would really be the mayor’s idea. (When things went well, some of those same people and groups were eager to take credit.) I don’t mean Freakfest was everything to me because a lot of people contributed. But in a political sense it was, in fact, all about me. No one else would be blamed if things went wrong and I would be eligible for re-election in just five months.

And it almost went wrong. At the end of the evening, of course, a group got together in the 500 block and started singing. The police came on horseback to try to both show strength and calm the crowd, as horses would. Then someone threw a necklace (crowd loved to throw necklaces like they would at Mardi Gras) at a cop on horseback. The cop grabbed the necklace, twirled it around his head, and threw it back. The crowd burst into laughter and applause. The tension has been defused. We did a lot of things right with the wolves at the gate ready to pounce on us if we fail, but it was that cop on horseback that may have turned the whole event upside down. I would like to know who he was because he deserves our thanks.

And the rest is pretty much history. There was no longer a problem on Halloween. A professional promotion group, Frank Productions, handled group bookings and ticket sales. Freakfest worked well for about a decade.

But now the enthusiasm for the event has faded and so it looks like the city will move on. That’s good, but let’s not forget that history will surely repeat itself. Going back to the 1930s, there has always been an almost hormonal (maybe it’s not “almost”) craving for a big student blowout in the fall and spring. The violence at these events is rare, but it seems to start out small and get more intense over time. Unless they fabricate young people differently these days, it will happen again and the city will have to respond.

And Freakfest is there as a model for regaining control when things get out of control. It is an event whose time has come and gone and will probably return.

Dave Cieslewicz is a Madison and Upper Peninsula-based writer who served as Mayor of Madison from 2003 to 2011. His reporting and opinions have been recognized by the Milwaukee Press Club. You can read more of his work at Yellow stripes and dead armadillos. He is the author of Light blue: How center-left moderates can build a sustainable Democratic majority.