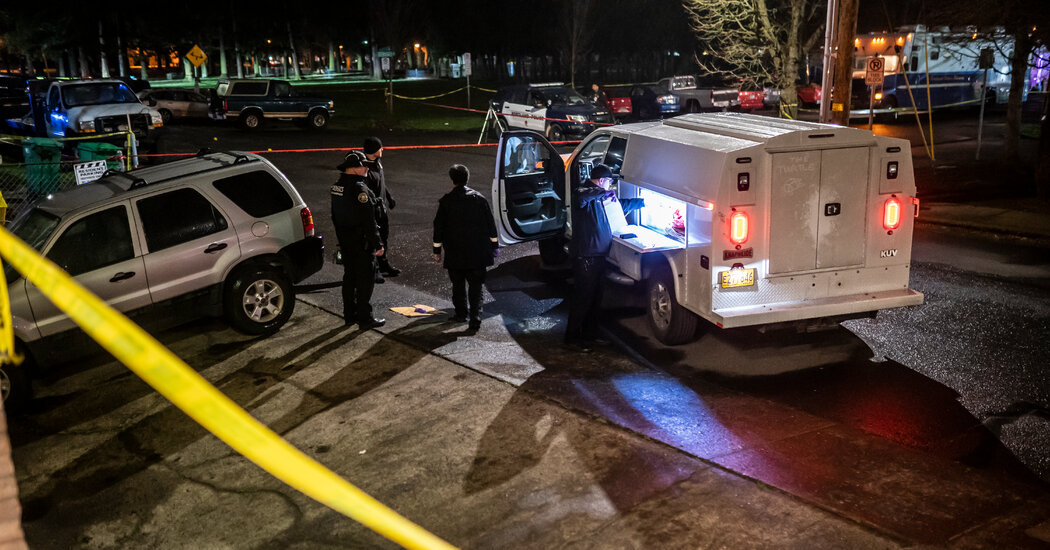 PORTLAND, Ore. — A fatal shooting over the weekend in Portland during a protest against police killings left one dead and five others injured, again raising tensions among social justice activists in the city.

The Portland Police Department said a woman was dead when officers arrived at the scene in the Rose City Park neighborhood Saturday night. Two men and three other women were taken to a nearby hospital, police said.

The shooting, which occurred at the start of a protest, appeared to be “a confrontation between armed protesters and an armed landlord,” Lt. Nathan Sheppard said by phone Sunday. “That’s what the preliminary investigation indicates.”

He declined to provide details of those hospitalized and declined to say if anyone was in custody.

The crime scene “was extremely chaotic,” police said in a statement Sunday, “and a number of witnesses were uncooperative with responding officers. Most people there left without talking to the police.

The statement added that detectives believe a large number of people either witnessed what happened or recorded the incident. “This is a very complicated incident, and investigators are trying to put this puzzle together without having all the pieces,” the statement said.

Hours after the shooting, the body of the slain victim still lay in the street as police struggled to determine how events unfolded.

A press conference on Sunday’s shooting was interrupted almost immediately by several protesters, one of whom denounced white nationalism.

A statement from Mayor Ted Wheeler’s office said he was “closely monitoring the situation with Police Chief Chuck Lovell.”

“We will provide an update once more information becomes available,” the statement said.

The shooting took place near a park in Portland that has been the scene of several protests against police killings in recent years. Neighbors said several shots were fired.

“I was sitting in the room talking to my wife, and all of a sudden you hear repeated gunshots,” said Jeff Pry, who lives in the area.

Protesters were expected to gather around 7 p.m. and begin marching around 8 p.m. local time from the area around Normandale Park, according to flyers shared online ahead of the event. The shooting appeared to have taken place early in the march, but few online accounts shared details and many activists did not respond to requests for comment. Some activist groups have warned protesters to limit the sharing of first-hand accounts on social media, whether by photo or text.

Protesters have been demonstrating in Portland against police killings for years, some since before George Floyd was murdered by a Minneapolis police officer in 2020.

Saturday night’s march was partly led by Letha Winston, whose son Patrick Kimmons was fatally shot in 2018 by Portland police responding to an altercation. A grand jury determined that lethal force was justified. Ms Winston has organized sometimes weekly marches to protest for racial justice.

Reports on social media said Saturday’s protest was a response to the death of 22-year-old Amir Locke, who was fatally shot by Minneapolis police while executing a search warrant early on February 2. . The murder of Mr. Locke, who was black, sparked anger in Portland.

Mr Locke was not the target of the police raid, which was carried out with a so-called no-knock warrant which does not require notifying residents. Minneapolis has since suspended the use of these warrants.

In an image promoting the protest on social media, organizers sought “Justice for Amir Locke” and “Justice for Patrick Kimmons”, in addition to others implicated in police killing cases.

While Portland police have been criticized for overreacting to protests, especially those that turned into vandalism – police admitted to using force more than 6,000 times during protests in 2020, prompting a rebuke from the Department of Justice – the constant clashes have infuriated many Portlanders, including the mayor.

Political violence, regardless of its origin, only undermines social movements that seek a more inclusive society, he said in the statement. “Whether it’s police brutality, paramilitary, vigilante or misguided actions for police reform, there’s simply no room for political violence in the Portland we’re working on. to build,” he said.