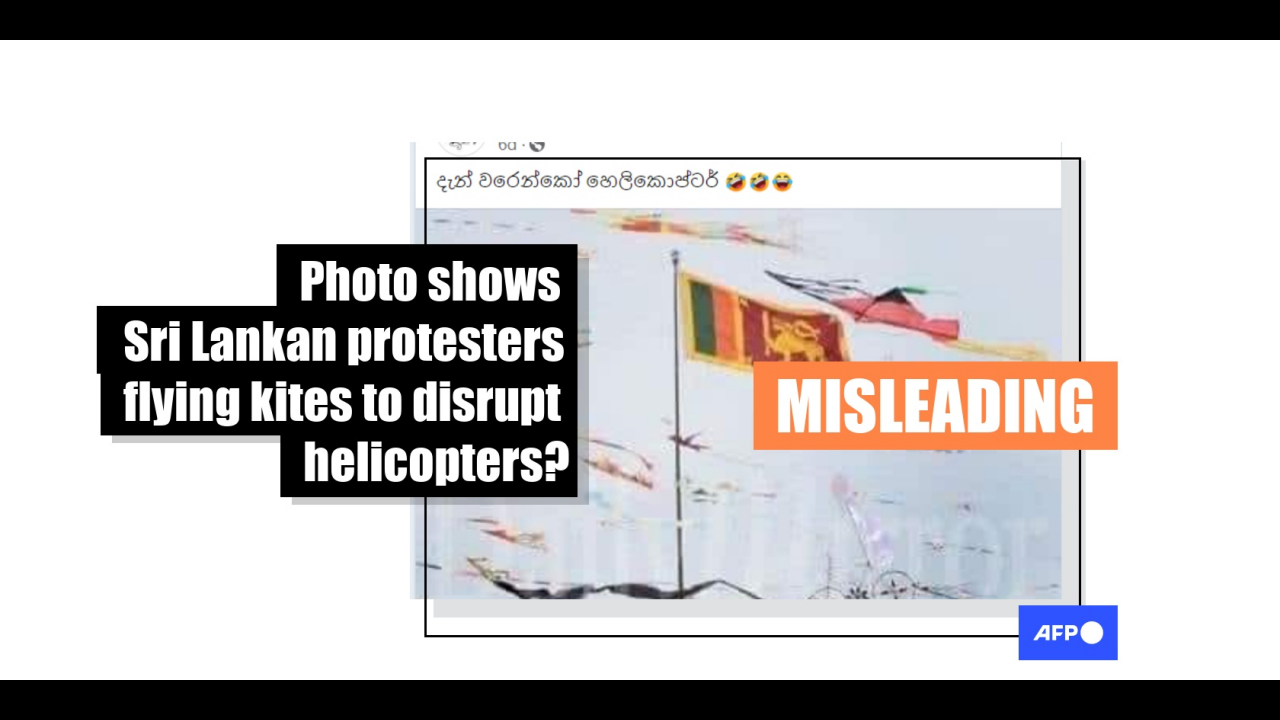 A photo has been circulating in Facebook posts that purports to show anti-government protesters in Sri Lanka flying kites to disrupt a military helicopter hovering over a protest site in the capital Colombo in mid-July. But the image, shared thousands of times, circulated in a misleading context. It was actually taken during a kite festival in Colombo in 2016, years before the current unrest. A journalist who was at the protest site told AFP that protesters did not fly kites to disrupt the plane.

The caption in Sinhalese translates to English as: “Bring in the helicopters now”.

The image circulated online after a video emerged on social media showing a Sri Lankan military helicopter flying low over Galle Face Green in the capital Colombo on July 13.

Demonstrators had gathered there to protest against the government’s inability to manage the country’s worst economic crisis since independence.

President Gotabaya Rajapaksa fled to Singapore on July 14, days after protesters broke into his official residence. He officially resigned from his post on July 15.

Sri Lanka’s six-time Prime Minister Ranil Wickremesinghe was due to be sworn in as president on July 21, AFP reported.

The same image has been shared over 9,000 times with a similar claim on Facebook, including here and here.

Comments from some social media users on the misleading posts indicated that some believed the image showed protesters flying kites to disrupt the military helicopter.

“What a generation of creative young people! The government and their enslaved military tried to clash with the wrong generation,” wrote one commentator.

Another user wrote, “Wow. How did you all find so many kites in such a short time. Anyway, great tactic to fight back.”

The claim, however, is misleading: the photo actually shows a kite festival in 2016.

A reverse image search on Google found the same photo published in this article on the website of local English language newspaper Daily Mirror on August 22, 2016.

“Colourful kites dotted the skies of Colombo yesterday during the kite festival hosted by one of the country’s leading private television networks,” reads the caption of the photo, referring to Sri Lankan broadcaster Derana .

“The photo shows kites in the sky of Galle Face, and in the background is the Chinese-built Colombo International Container Terminal (CICT) at the Port of Colombo.”

Below is a screenshot comparing the image in the misleading post (left) and the photo published by the Daily Mirror (right): 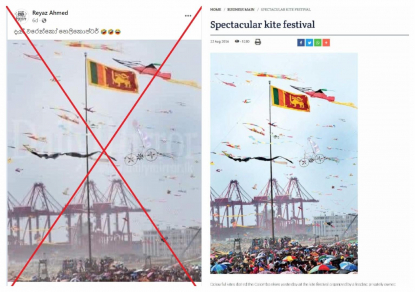 Derana uploaded a clip on August 21, 2016 to his YouTube channel showing the same kite festival.

‘Tense’, but no kites

A 26-second clip uploaded to Facebook on July 13, 2022 shows the military helicopter flying low over a crowd of protesters during the same demonstration. There are no kites in the clip.

A Sri Lankan photographer who witnessed the protest but did not wish to be named told AFP that protesters did not fly kites to disrupt the military helicopter.

“None of them flew kites to fight back,” he told AFP.