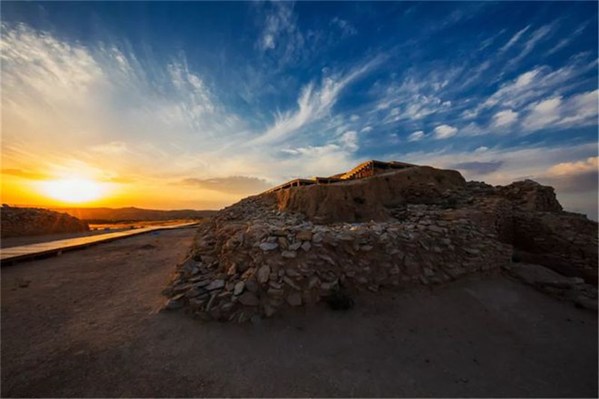 The photo shows the ruins of Shimao, an important prehistoric site in Shenmu City, northwest China’s Shaanxi Province, at sunset.

According to XionghuiDirector of from Shaanxi office of local chronicles, local chronicles of Shimao, as an encyclopedia of Shimao ruins, could record archaeological finds, reflect the protection and management of cultural relics, and contribute to its application for the World Cultural Heritage List of Shimao. ‘UNESCO.

Shimao site, the largest city site from the Longshan period to the Xia dynasty (Neolithic age) discovered in China so far, is of great importance in tracking the source of China primitive civilization.

Covering 4 million square meters, the lost city dates back to 2300 BC. is located on the edge of the Muus Desert in Gaojiabao Town, Shenmu City.

The site consists of three parts, including the central pyramid of the imperial city, the city center and the outer city. The three stone enclosures were a fine architectural example for China old capitals.

In recent years, excavators have uncovered a city of stone with huge fortifications and sophisticated infrastructure, thousands of luxurious artifacts including jades, pottery, bone artifacts, stone carvings and paintings murals.

The Shimao site is hailed as one of the most important prehistoric archaeological finds in China in this century. Its academic value has been recognized at home and abroad.

In April 2019six projects including the ruins of Shimao have been added to China Tentative List of World Heritage Sites. In addition, the Neolithic city of Shimao was ranked among the top 10 archaeological discoveries of the last decade by the American journal Archeology in December 2020.

The Conversation: Alcohol marketing has crossed borders and entered the metaverse – how to regulate the new digital risk?