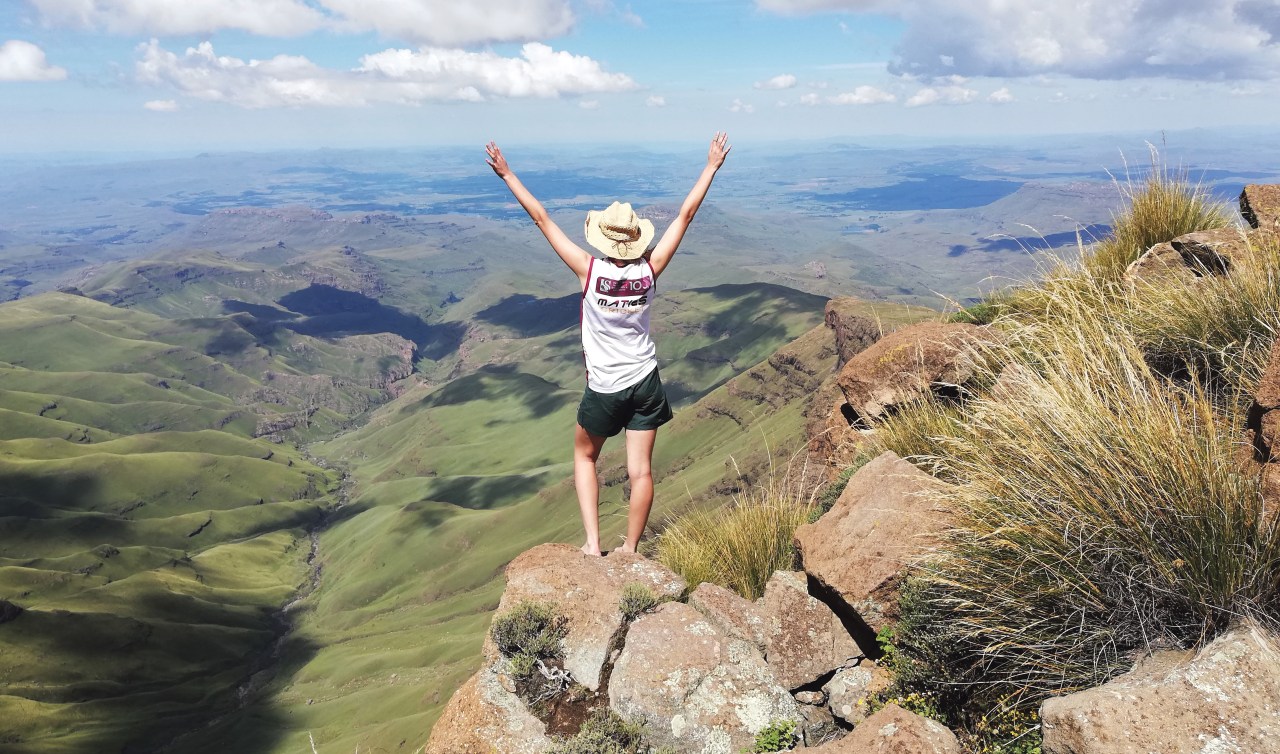 Sani Lodge Backpackers near Himeville and Underberg in KwaZulu-Natal is one of my favorite places in South Africa. For many years I’ve stayed a night or two, at the start or end of hikes: the Giant’s Cup Trail starts at its doorstep, as do the runs, including the infamous Sani Stagger, billed as “the steepest marathon in SA”. Recently I was there for the start of the 2022 Sani2C mountain bike race.

The lodge is like home, but with a common room with views and the vibes of the mountains rather than the noises of the suburbs to infuse your day. Its communal kitchen and living room look out over the Sani Pass, the Drakensberg escarpment and beyond to Lesotho.

“The doors are never locked,” explains its owner, Russel Suchet.

That was until the Covid-19 pandemic – particularly the hard lockdown from March to June 2020 – almost added the lodge to its list of excess business and tourist establishment deaths.

If the lockdown had done the worst, it would have killed a business in its prime; one without any of the comorbidities that often plague tourism.

Much of its health is due to the fact that Sani Lodge Backpackers subscribes to the principles of ethical and empowering tourism. Since 2011, he has been a member of Fair Trade Tourism (FTT), an organization that describes itself as “a network of passionate and inspiring tourism leaders in Southern Africa who have understood the need to improve tourism and are committed to the principles fair tourism.

According to FTT, ethical tourism is “defined by fair wages and working conditions, fair purchasing and operations, equitable distribution of benefits, and respect for human rights, culture and the environment” .

In the practice of fair tourism, “the people who bring their land, resources, labor and knowledge to tourism are the ones who reap the benefits, and the natural environment on which it all depends is treated with respect in the pursuit of destinations more resilient”. .

This seems to be an accurate description of Sani Lodge Backpackers.

Suchet explains that when he and Simone, his wife, started the business in 1992, it was with an ideal and a vision, a love for nature, but not quite understanding the business they were getting into. Russell is a teacher. He had come from teaching at a secondary school in Harare to start the lodge. Simone, also from Zimbabwe, was a pharmacist. Today, she is an artist.

The nearly 30 years since then have been a journey of discovery, and an important part of that journey has been to discover and then integrate fair tourism into their practice.

Today, Suchet is an honorary registered officer of Ezemvelo and Drakensberg Adventures is one of the main tour operators around the pass: by car, on foot, by pony.

Their personal development has mirrored the development of the lodge: the adventures they offer have evolved with an arc towards greater inclusion of local communities and the protection of the valuable and unique ecosystem that makes up the wonderful Berg.

Suchet says 4×4 trips up the rugged Sani Pass date back to the mid-1950s. But after 1994, when South Africa increasingly became a destination for international tourists, interest s It is also increased to visit the remote villages of Lesotho and the Basotho people who live across the border.

Tourists would visit villages like Skiring to see sheep shearing or to meet local households and experience their way of life. But, rather than belittle locals with unpredictable and arbitrary tips, Suchet decided to institute a pay-per-head system for visits to the village, which now include a traditional lunch, and per vehicle for visits to shearers and shearers. shepherds.

The principle of fair payment for services rendered has become the basis of all their Lesotho tour offerings, and now extends to multi-day village experience tours, pony treks and village treks” slackpacking”.

“It really worked and completely changed the atmosphere,” says Suchet, “Lesotho Tourism praised Sani Lodge for our best practices and made our model mandatory for all tour operators in this region.”

Back home, Sani Lodge Backpackers set up a reading program at the nearby primary school in KwaPitela village. A board in the common room provides information on current projects in which visitors can get involved during their stay.

One project involves volunteering to help primary school students learn conversational English through reading. This has a double advantage. Children benefit from better reading and language skills and, as the school is overcrowded with two grades per class per teacher, a guest reader allows the teacher a few hours of better teaching in a split classroom. The visitors also helped set up a library at the school.

Another poster invites you to “read books to the children of our staff” as part of the Funda Reading Club.

Suchet laughs as he explains the onerous requirements of being a member of FTT: his triennial audits of their policies and practices on human resource management, environment and waste management, and community involvement. But he admits it was a learning experience and led to the creation of a strong and committed team, as well as trust.

He thinks fair tourism should be more visible in South African tourism.

However, the Covid-19 almost put an end to all this. Suchet explains that when the hard lockdown started in March 2020, “at first it was peaceful, but then it became about survival.”

“We lost at least R200,000-300,000 in forward bookings. To begin with, all staff had to be sent home. When we were able to reopen the restaurant in July, and the lodge in August, we set up a rotation system.

“We had to lock the buildings for the first time. No one told the cows there was a lockdown! he says.

“They still needed milking. We adapted by donating their milk to the local community and started cheese making and trained the ladies who worked in the restaurant on how to make it. Making the cheese gave them enough hours of work to be viable for us and for them.

Even when the lockdown was eased, the Sani Pass border with Lesotho remained closed for a long time, strangling access to Basotho communities and shutting down one of the region’s main sources of tourism. Suchet says it was “thanks to Dr Nkosazana Dlamini-Zuma” (after whom the municipal district was renamed) that Sani Pass, alone of all the small border crossings, was allowed to reopen in October 2020.

This has made a huge difference to tourism in the region and to the people of Lesotho.

Suchet notes that in Lesotho, rural communities have received no support from their government. In contrast, although it was “an absolute nightmare to apply for”, the Temporary Relief Scheme for Employers/Employees (Ters) grant from South Africa “had a significant impact for everyone. It literally kept food on the tables for our staff.

However, when Ters ended in March 2021, “it was too soon, long before tourist activity could recover”.

To get things done, Suchet and Simone dipped into their savings and did not receive a salary from March 2020 to February 2021.

I ask if things are back to normal now.

Far from it, he said. In July 2021, the KwaZulu-Natal riots saw the town of Underberg close to being leveled and travelers stayed away. The lodge was home to local migrant businessmen and it was only an alliance of farmers and taxi drivers that saved Underberg from the destruction seen in towns like Bulwer and Donnybrook.

“Some people have emigrated. Many tourist businesses across the country have disappeared. He mentions the famous Baz Bus as an example.

The morning I interviewed him, Suchet was busy. Sani2C runners and a few foreign tourists rocked the place.

Plans are underway to install solar power and he spoke of the challenges of recycling when local municipalities are too dysfunctional to organize a system to get recycled waste out of rural towns.

But, even here there is some hope as he mentions how in the 2021 local elections a number of opposition candidates in the municipality of Dr NDZ won seats and the majority of the ANC – the cause of complacency and corruption in service delivery – has been shattered. “With a bit of luck!”

As I cycled down the 263km Sani2C, I was able to leave Sani Lodge Backpackers confident that it will still be there as a little haven of peace the next time I have a reason to visit.

Some people may scoff at the small scale of interventions made by places like the Sani Lodge Backpackers in their efforts to advance fair tourism. But transformation is a state of mind. It starts in your own backyard. It starts with small actions rather than big controversies. It identifies opportunities for the development of real people in real communities. In this way, it builds social cohesion rather than exclusion. It also considers the rights of nature and seeks mutually beneficial pathways for humans, other species, and the planet we live on.

The best way to ensure that Sani Lodge Backpackers and the communities it supports grows bigger and bigger is to plan a visit. You will not be disappointed. DM168

This story first appeared in our weekly newspaper Daily Maverick 168, which is available nationwide for R25.