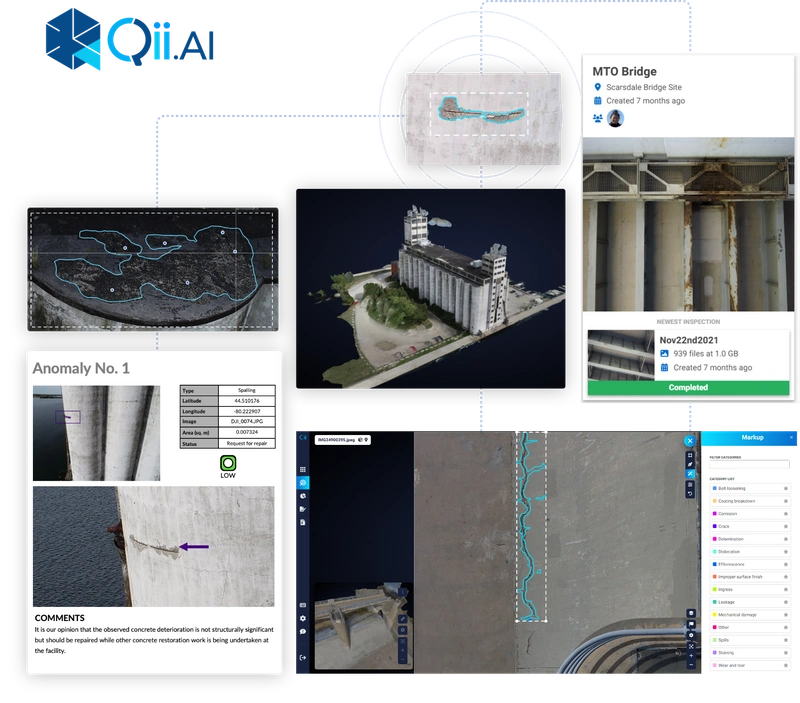 Kongsberg Maritime’s Sensors and Robotics division has launched ScanFuseTMpowered by Qii.AI, a web-based software application that enables civil engineers to create comprehensive mosaics of maritime assets above and below the waterline by harnessing the power of artificial intelligence and machine learning.

Civil engineers use sonar imagery to assess the structural integrity of shoreline facilities and structures such as docks and berths, bridge piers and dams. These images help engineers determine if hydraulic scour is threatening the structure, identify degradation of building materials that require remedial action, and identify changes in identified areas of concern over time. The American Society of Civil Engineers, the United States Federal Highway Traffic Administration, and the United States Army Corps of Engineers include sections on sonar inspection in their respective manuals for infrastructure and bridge inspection.

Civil engineers can create sonar images for assessment using high-resolution single-beam sector-scan sonar such as Kongsberg Maritime’s 1171 sonar or using multi-beam sonars that create clouds of 3D dots. While 3D images can be created quickly and cover large areas, they do not have high resolution and do not capture 100% of the scanned area. The best images for civil engineering evaluation and use are captured using high resolution single beam scanning sonar.

A disadvantage of high-resolution scanning sonars is the need to merge multiple images to create a complete picture of the structure. Before ScanFuse, this work had to be done manually using image-editing software like Photoshop. This requires an understanding of the sources of sonar image distortion associated with differences in the speed of sound in water due to temperature and salinity gradients. Image interpretation, particularly with respect to shadow, requires significant operator experience and skill. These skills, unless renewed regularly, degrade over time.

ScanFuse allows the civil engineer to load multiple individual sonar images into the app. ScanFuse then automatically creates a mosaic of all images. The civil engineer can then begin to use the machine learning feature of the software to identify areas of concern such as scour areas, concrete cracks, damage or corrosion of submerged structures such as piles and dolphins , or unidentified debris of concern. As the civil engineer works with the software, the machine learning capability becomes smarter and the user benefits from the software presenting pre-identified areas of concern for analysis and decision making. decision.

ScanFuse takes inputs from other above-the-waterline imaging technologies, such as high-resolution georeferenced photographic images, LIDAR point clouds, FLIR data, and thermal images, to create digital twins 3D of an asset above and below the waterline.

Kongsberg also said he has partnered with Northwestern Michigan College and its infrastructure inspection microloan. ScanFuse image generation is part of this program. This microcredit is intended for civil engineers in charge of inspecting and evaluating maritime infrastructures below the waterline.