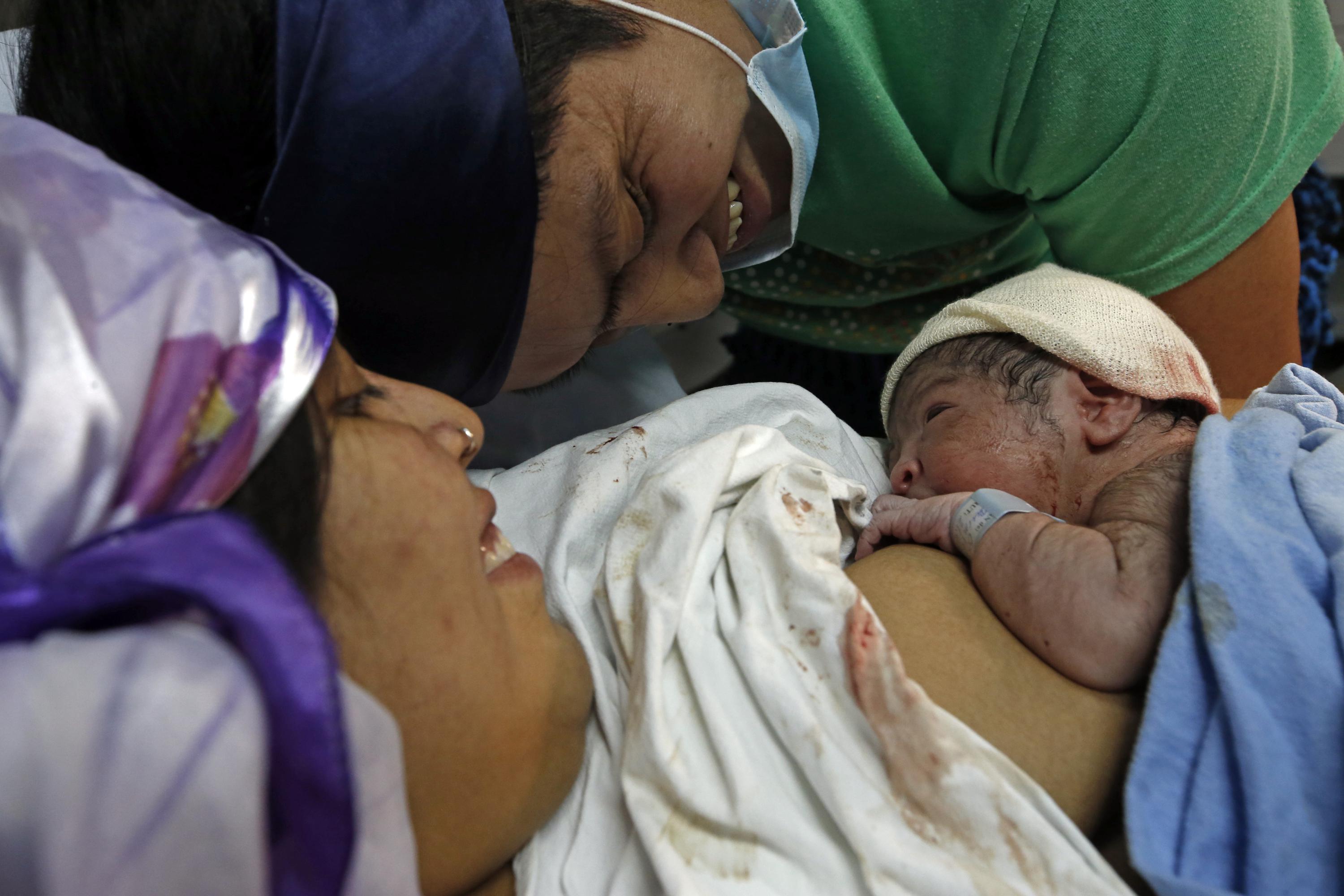 Hospital in Chile integrates indigenous medicine, from birth to death

OSORNO, Chile (AP) — In labor with her first child last month, Lucia Hernández Rumian danced around her hospital room while her husband played the kultrun, a ritual drum.

She refused painkillers from the hospital staff to get massages and oil massages instead of her cultural liaison, who had ceremoniously cleansed the space according to Mapuche customs.

“It became my own space,” Hernández said.

The largest public hospital in the city of Osorno in southern Chile is finding new ways to integrate these and other indigenous healthcare practices. There is a special delivery room with Indigenous pictures on the walls and bed, forms for doctors to approve herbal treatments from trusted traditional healers, and protocols for “dying well” taking into account spiritual beliefs.

The hospital’s efforts validate cultural practices at a time when Chile’s indigenous groups – especially the largest, the Mapuche – are fighting for rights and restitutions with unprecedented visibility as the country prepares to vote on a new constitution next month.

But they also restore a crucial spiritual component to health care, according to medical professionals and patients at the San José de Osorno Base Hospital.

“It must be a guarantee – we take care of the physical part, but without transgressing the spiritual dimension,” said Cristina Muñoz, the certified nurse midwife who pioneered new childbirth protocols that pregnant indigenous women can customize and are considered the first in the country.

Cristina Aron, the patient who first inspired Muñoz over a decade ago, has now become a cultural liaison with Hernández and two dozen other women, from pregnancy to early motherhood.

“Childbirth is a spiritual energy event for mother, baby and community,” Aron said.

She had hoped to deliver her daughter in the countryside with a traditional midwife. But Chilean law requires medical professionals to give birth due to high maternal mortality in the past.

Aron therefore turned to Osorno Hospital and negotiated her delivery conditions with Muñoz, including being accompanied by a woman with knowledge of Mapuche practices and taking her placenta to ceremonially bury her in her ancestral lands. .

The Mapuche see the placenta as containing a twin spirit to that of the child. His burial, often with a tree planted on it to grow like a newborn, is supposed to create a permanent link between the children and the natural elements of their family’s territory.

“It’s something very poetic and very revolutionary,” said Alen Colipan, whose son’s placenta was placed by a river near his paternal grandmother’s house. “He will not feel this uprooting from his land.”

Colipan was 17 when she gave birth in the Intercultural Delivery Room in Osorno, with a floor-to-ceiling photo on three walls of the rocky beach that is home to Grandfather Huentellao, a protective spirit revered by the Mapuche Huilliche , the indigenous group of the region.

Colipan said his then 85-year-old midwife Irma Rohe, who had never entered the hospital, was allowed to receive the infant “without gloves or other imposed objects” and ritually clean him.

“We go back to wanting to give birth with people with ancestral knowledge,” Colipan said. “Even our way of being born was dominated. We have to start releasing it.

Chilean law now requires hospitals to give the placenta to mothers if they ask for it. For a decade, he also mandated cross-cultural care in places with large Indigenous populations.. Mapuches make up a third of the residents of Osorno and eight out of ten in the adjacent province of San Juan de la Costa, said Angélica Levicán, head of indigenous relations for the hospital since 2016.

“Aboriginal health care has always existed. Then came another system to invalidate our own system,” she said. “Our intention is that they complement each other.”

Joining the two types of medicine is not easy. Many Aboriginal people perceive public hospitals as another state institution that discriminates against their beliefs.

Mapuche medicine, based on spirituality, is also different from what doctors are trained to do, said José Quidel Lincoleo, director of a center for Mapuche health care studies in Temuco, another southern city with a large indigenous population.

Mapuche healers seek to connect with a patient’s spirit to uncover “the biological, social, psychological and spiritual root of the problem” that manifests as a disease, Quidel added.

“It could be another past life, or harm done to you, or a lack of self-knowledge that causes us to transgress our view of the world,” he said.

But doctors and traditional healers say they can complement each other realizing that each expert knows only a fraction of what is possible, especially when battling new diseases like COVID-19.

“We understand that saving a body must be compatible with beliefs,” said Dr. Cristóbal Oyarzun, rheumatologist and internal medicine coordinator at Osorno Hospital. “A patient with inner peace has a better chance of healing.”

This is difficult to achieve in the aseptic and isolated environment of a hospital, especially during the pandemic. Mapuche healers continued to pray and “spiritually accompany” patients from afar, said Cristóbal Tremigual Lemui, a healer from San Juan de la Costa who has long collaborated with Osorno Hospital.

“For us, this is essential…so that patients can receive the energy they need,” he said.

Family members also flocked to the hospital’s prayer space — an outer circle of small sacred laurels and cinnamon trees with a hearth next to the parking lot — to hold ceremonies for the dying, Levicán said.

Walk-in and admitted patients who identify as Indigenous – an average of 50 a day – are welcomed and supported by Erica Inalef, the hospital’s cross-cultural facilitator, so that “they don’t feel so alone “.

When, as a teenager, she took her elderly father to the hospital, the doctors barely spoke to them and “body and mind were separated”.

Today, doctors can see the enthusiasm with which patients welcome the arrival of consulting traditional healers, and this helps build mutual trust, Inalef said.

Trust can manifest itself in a traumatologist signing a patient’s lawenko – an herbal tea whose exact composition is kept secret by healers – or in an obstetrician allowing a woman in labor to wear her munulongko, a scarf meant to protect her.

Cultural clothing is a section of the work plan that Muñoz drew up five years ago, which pregnant women can customize. She hopes others will become aware of this option – only about 20 of the hospital’s 1,500 births each year are cross-cultural births.

“Indigenous women are doubly shy, discriminated against because they are women, indigenous, poor and rural,” Muñoz said. “We tell him, your body is the first territory you will recover.”

Recovering ancestral practices is what prompted Angela Quintana Aucapan to deliver her baby – Namunküra, or “firm step” in Mapudungun – in the special delivery room recently, while parents played traditional instruments.

“I was able to do it like my ancestors did,” she said. “With a ceremony while we waited for the newest member of the family, I felt supported as I received my baby.”

Associated Press religious coverage receives support through the AP’s collaboration with The Conversation US, with funding from Lilly Endowment Inc. The AP is solely responsible for this content.

‘Kate’s success is that she didn’t follow in Diana’s footsteps’: royal expert