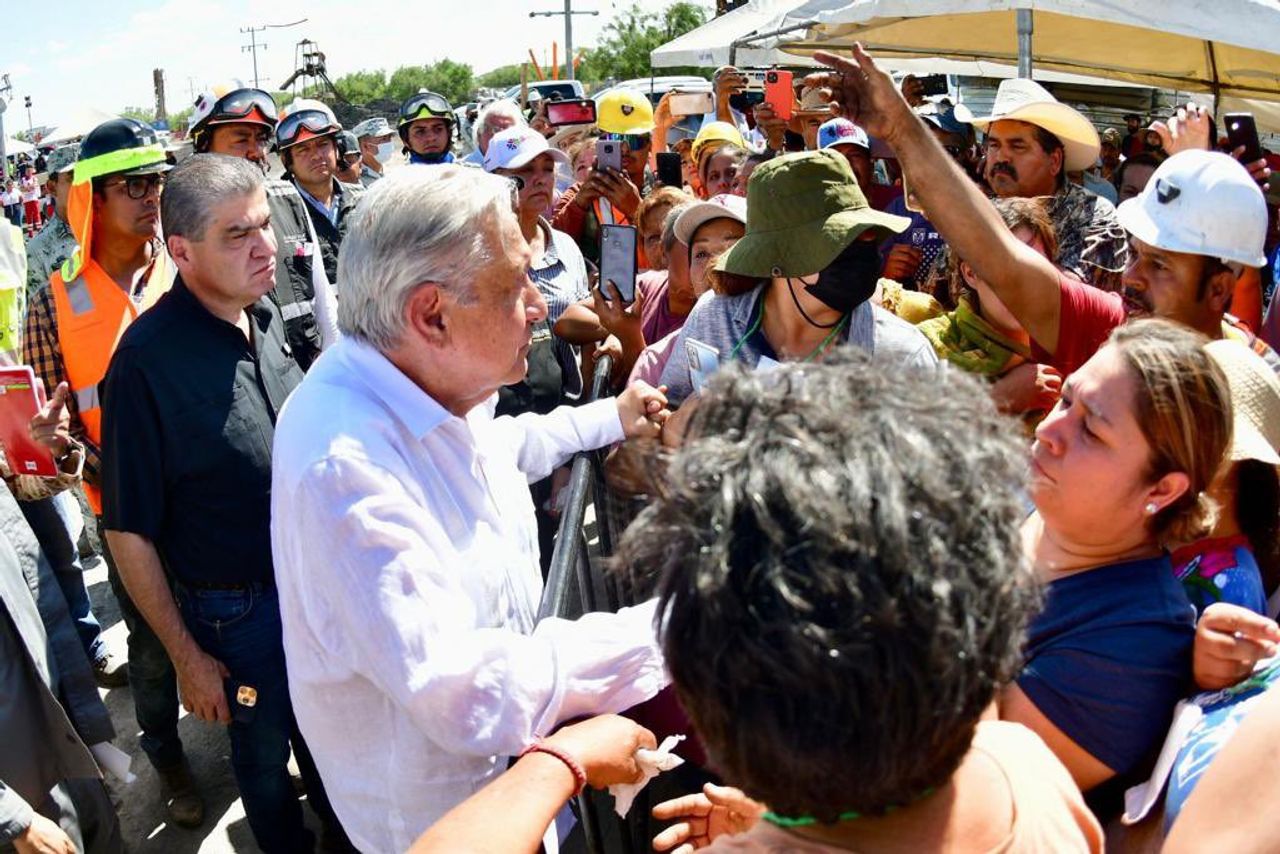 On Sunday, four days after ten miners were trapped in a flooded coal pit in Sabinas, Coahuila, Mexican President Andrés Manuel López Obrador, known as AMLO, was met with angry shouts and mockery from from parents and co-workers of miners as he walked. for a few minutes for a blatant photo op and to tell them harshly to trust the “techies” and that he “will never forget them”.

Relatives have been counting every minute since Wednesday, when loved ones were trapped 200ft (60m) underground as water rose 100ft above their tunnel. As of this writing, not enough water has been pumped out to allow divers to enter the pit, which is just over an hour’s drive from the Texas border.

The families peppered the president with demands for faster action in the rescue and a solution to dangerous conditions in the coal mines more generally, but before they could even finish their sentences he quickly did goodbye and left.

“Why did you even come?” some relatives shouted as they were pushed back by a massive contingent of hundreds of army and national guard soldiers.

“He just came to take his picture and leave,” the wife of a miner told El Pais. The sister of the miner José Rogelio complained to Journada that AMLO only met them “for about five minutes”. She said: “It is not enough. We were expecting him to bring some big machinery to dig another tunnel for the water to flow out… there are some big pumps lying around and we don’t know why they aren’t being used.

Lucía, the mother of trapped miner Ramiro Torres, said with scathing sarcasm: “Mr. President, I appreciate that you came to take your picture with my pain, that of my family and each one of us here. I hope your photos will serve you for the policy. She scoffed, “Thank you for your long visit.”

In response to the backlash, AMLO argued on Monday that his administration was powerless. It has not granted any new mining permits, he said, and the government and unions “are not in a position to monitor so many mines”. Such statements amount to washing hands on the fate of minors and families.

His visit and comments reflect the indifference of the entire Mexican ruling class to the safety and welfare of workers. The AMLO administration, which has been promoted by the pseudo-left as the champion of the working class, and its partners in the so-called “independent” unions monitor dangerous conditions that generally serve corporate interests, not the exception.

In the first two years of the pandemic, Mexico’s excess death toll exceeded 632,000, more than double the official COVID-19 death toll, due to its administration’s policy of reopening factories, mines and workplaces while letting the virus run rampant. Last year alone, 110,000 working-age adults between the ages of 35 and 64 died of COVID-19 in Mexico, according to national statistics agency INEGI.

While feigning concern for worker safety, AMLO and its security guards went maskless on Sunday, despite the continued global outbreak of the pandemic caused by the deadly Omicron BA.5 subvariant of COVID-19.

The incident recalls how relatives of the 65 workers who died in a 2006 Pasta de los Conchos coal mine explosion ousted Mineros union leader Napoleón Gómez Urrutia, a senator from AMLO’s Morena party and close AFL aide. -CIO, when he showed up at the rescue site a week later. His union had published a report two weeks before the disaster concluding that the mine was safe. AMLO itself has postponed its promised effort to recover the bodies at the mine for two years.

Ninety-nine percent of the coal purchased by state power company CFE comes from these wells in Coahuila, and production has increased as part of AMLO’s energy reform. A 2020 CFE document explicitly sets out “presidential instructions” to buy coal from 60 producers in Sabinas.

Behind populist claims to save the CFE, his government has effectively subordinated the state agency to the big oil, gas and mining companies. In April, the president “reassured American businessmen that the CFE would buy all the energy they invest in production, which would make them secure investments,” as reported by Mining Mexico.

Mining production in Mexico jumped 5% in 2021, surpassing pre-pandemic levels, including a 28% annual increase in coal for heating, which is almost exclusively produced in Coahuila.

As Manuel Fuentes Muñiz, a professor at the Autonomous Metropolitan University (UAM), explained to El Financiero, whether the workers are hired by contract or informally, their conditions are sanctioned by the authorities. He explained: “The Ministry of Labor has acknowledged that this mine has been in operation since January…and they have a team of inspectors who should check the area periodically. However, he added, for two years the ministry “refused to receive the collaboration [for inspections] inhabitants.

In the 21st century and on the frontier of the world’s most advanced economy, workers are taken hundreds of meters underground to spend their entire shift squatting in tunnels around 60cm wide or less. There are no possible exits or emergency measures, which makes these pits incompatible with worker safety. In fact, in 2011 the National Human Rights Commission concluded that none of the mining pits in the area were safe. Child labor is also widespread. The trapped minors are between 22 and 61 years old.

Sabinas miners work without health insurance or benefits and receive between 2,000 and 5,000 pesos ($100-250) each week, depending on production levels. This system and the growing demand for coal forced miners to work grueling hours in such dangerous conditions.

In a moving series of interviews with relatives by N+Media, Josué Rodriguez, son of miner Margarito Rodríguez and miner himself, explains that he hopes they have found a higher underground area away from the water. “The pits are like…going down not knowing if we’ll ever come out alive.”

Like AMLO, other “nationalist left” governments that have partnered with labor bureaucracy across Latin America, such as those led by Pedro Castillo in Peru, Luis Arce in Bolivia and Gabriel Boric in Chile, also impose dangerous conditions and miserable to miners and other workers. while relying on the police and the army to repress their strikes and demonstrations.

At the same time, globalization has transformed northern Mexico into a major industrial hub, alongside its more traditional extraction of natural resources, and tied workers from all sectors into complex, global supply chains. Far from improving living standards and working conditions, the capitalist “resource curse” has spread to maquiladoras where foreign investors use local elites, including labor unions, to oversee the overexploitation of workers without caring their health, their standards or the environment.

Miners and their families can only defend their lives and living conditions by organizing independently of all pro-capitalist parties and unions and joining their struggles with workers in all industries and across borders. This is the purpose of the call by the World Socialist Web Site to build the International Workers Alliance of Rank-and-File Committees.

“Websites Shouldn’t Scream, They Should Serve” – ​​This Award-Winning Web Designer Tells Us Why