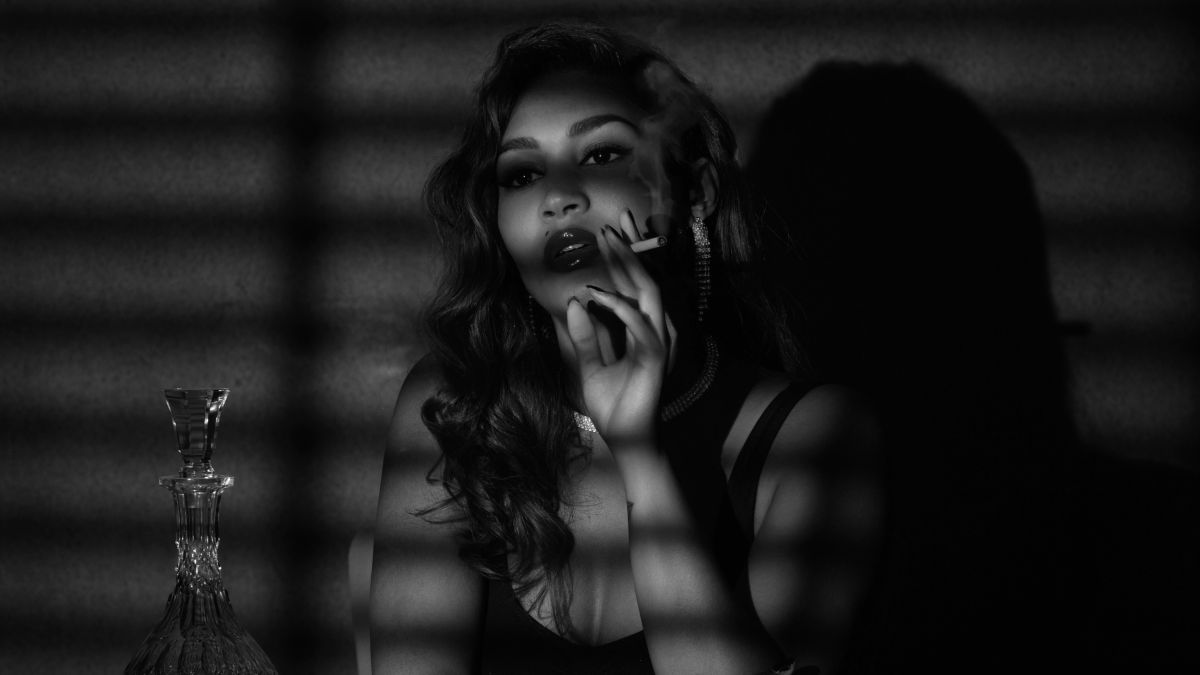 Film noir is a style of portrait photography that originated in Hollywood in the 1940s. It is characterized by its moody and dramatic mood. Today, this style is still popular, and many portrait photographers use film noir techniques to achieve atmospheric images using low-key lighting and high contrast.

The key to successful film noir photography is finding the perfect balance between light and shadow. By carefully controlling the lighting, you can create a sense of mystery and drama. Film noir portraits often have a quality of sophistication and glamor that is unique, so if you’re looking to add a touch of Hollywood glamor to your own portraits, dramatic B&W photography is the perfect style for you.

To help with this theme we used a gobo. It is a physical template that you place between the light source and the subject to cast a shadow or pattern. Gobos can be used to create all sorts of different effects, from simple shadows to complex patterns. So whether you’re looking to add a touch of drama or just want to experiment with light, they can be very useful.

We used Pixapro’s Snoot Spot Optical Projector to provide the light. There is a wide range of gobos that fit between the lens and the light to allow you to project different shapes and patterns onto your background or subject. You should also attach a lens – ideally a prime lens with a large aperture that lets in more light. Different focal lengths produce patterns at their relative sizes – the shorter the focal length the wider the projection, but a 35mm or 50mm lens is ideal.

Although gobos can be purchased commercially, you can also make one at home by cutting a piece of cardboard in any design you like. Homemade gobos are a great way to add creativity to your shots without spending a lot of money, and the possibilities are endless. And if you don’t feel like making your own, try rigging your flash behind Venetian blinds to replicate the same style of film noir.

Gobos are metal templates that you place in front of a projector to cast a specific shadow on your scene. We used gobos from Pixapro’s full kit and a Pixapro Snoot Spot optical projector to cast the light across the model.

A prime lens such as a 35mm or 50mm is a good choice to attach to your optical snoot or projector. Now select a suitable gobo that looks like a window or blinds, insert it into the gobo holder and slide it into the slot behind the lens.

Set your camera to manual mode and set the shutter speed to 1/125s, aperture f/8 and ISO800, but increase it further if the image is too dark. Set the Picture Style to Monochrome to see the black and white image in Live View on the LCD monitor.

Take a test shot and bring the optical snoot closer to your subject for a smaller projection or farther to cover a larger area. Thick shadows complete this style of film noir, but be sure to clearly see the subject’s eyes as well as other key parts of the image.

Use the focus ring on the lens attached to the optical snoot to adjust the intensity of the shadow pattern. You can choose hard shadows with defined edges and deeper blacks or rotate the focus ring to make the shadows softer and less harsh – adjust this to your preference.

6. Increase contrast in the edit

Convert your images to black and white in post-processing to add the finishing touch to the classic film noir effect. You can also increase the contrast using a program such as Adobe Camera Raw, by adjusting the sliders for contrast, highlights, whites, shadows, and blacks.

If you enjoyed this tutorial but want a little more power from your laptop, why not take a look at the best photo editing laptops (opens in a new tab)? If you really want to improve your skills beyond online photography courses (opens in a new tab) could be the way to go.

Merit Bronze Balm is the “easiest bronzer ever”

A Knives Out Mystery releases new images and character details