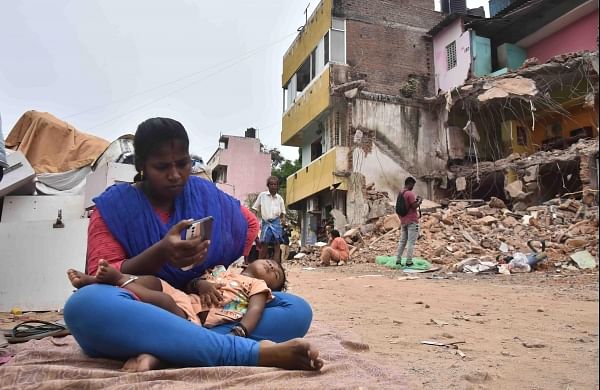 CHENNAI: Following the death of 58-year-old VG Kannaiyan who set himself on fire on Sunday in protest against the eviction of Govindasamy Nagar residents in Raja Annamalaipuram by Water Resources Department (WRD) officials, Chief Minister MK Stalin told the Assembly on Monday that all residents of Govindasamy Nagar will be allocated houses at resettlement sites being constructed in Mandaveli and Mylapore by the Tamil Nadu Urban Habitat Development Board (TNUHDB).

The CM said that a new resettlement policy covering all aspects of people’s welfare will soon be drafted and that people will now only be moved after all basic facilities have been provided at the resettlement sites. “Consultations will be held with people prior to resettlement to prevent such incidents. We will ensure conflict-free operation by talking with local elected officials,” the chief minister said.

Announcing Rs 10 lakh solatium to Kannaiyan’s family, the CM said he spoke with a heavy heart and hoped this would be the last of such tragedies. Meanwhile, Kannaiyan’s family refused to accept his body after he died around 3am at Kilpauk Medical College Hospital on Monday. He had suffered 90% burns.

The family wanted the government to file a complaint of complicity in suicide against officials, especially those in the Water Resources Department, who were involved in the eviction campaign, the Rs 50 lakh solatium and the government employment of a member. of the family.

According to a senior TNUHDB official, the land owning department, WRD, decided to evict the residents due to a contempt of court case.

“As we had to allocate houses to residents within a limited timeframe, we gave them resettlement sites where houses were vacant. We also assured residents that they would be allocated houses together in the same block when construction houses would be completed in other areas,” the official said.

Continuing their unrest on Monday, residents of Govindasamy Nagar wore black robes and held signs with the slogan “our land is our right”. They urged the authorities to stop the eviction and give them pattas for their homes. Leaders of various political parties, including CPI, CPM, DMDK and NTK, took part in the unrest.

Speaking at the site of the protest, CPM leaders said that if the authorities continue their eviction campaign, the party will stage an agitation demanding the removal of residents from apartments being built by a businessman whose the PIL seeking to evict the residents of Govindasamy Nagar prompted the action.

They said it was unfair that the eviction took place after successive governments encouraged residents to build houses. “Someone had to set themselves on fire for the government to hear us. We pleaded with officials saying we are not invaders and need time to leave,” said resident Vedhagiri.

Residents said their homes were 40ft from the Buckingham Canal and the locality was declared a slum in 1971.

Several civil society activists had written to the CM saying the slum had been classified as “clean” in 2005 and that carrying out an eviction in the middle of a school year violated children’s rights. The Supreme Court is expected to hold a hearing on Tuesday in the case filed by the residents.