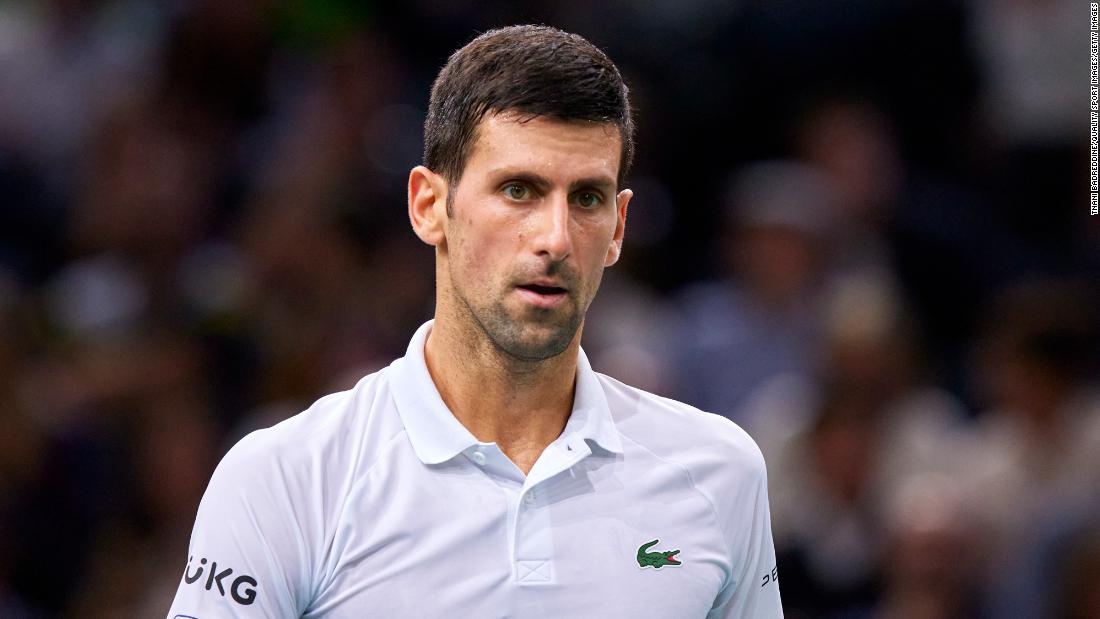 Djokovic, the world’s No. 1 in men’s tennis, has not publicly disclosed his vaccine status – but at a press conference on Thursday Australian Prime Minister Scott Morrison said he “had no exemption valid medical “to the vaccination requirement for all arrivals.

â€œEntry on a visa requires a double vaccination or medical exemption,â€ Morrison said. “I am informed that such an exemption was not in place, and therefore he is subject to the same rules as everyone else.”

The 34-year-old traveled to Melbourne after tournament organizers, working with the Victoria Department of Health, said he had been granted a medical exemption to play but was stranded at the border and said he did not follow the required entry rules.

Health Minister Greg Hunt said Thursday it was up to Djokovic to appeal the decision – “but if a visa is canceled someone will have to leave the country.”

Djokovic’s legal team has requested an urgent injunction against the decision by Australian border forces to revoke his visa. The country’s Federal Court has adjourned the decision until Monday on whether he will be allowed to stay in Australia or be deported, according to Reuters and public broadcaster ABC.

Djokovic will spend the night in Australia while the injunction goes through the courts, ABC reported.

Djokovic supporters gathered outside Melbourne’s Park Hotel on Thursday, where he was reportedly transferred after being detained at the airport, according to CNN affiliates Seven Network and Nine News. The hotel was once used as a Covid-19 quarantine hotel for returning travelers, but now functions as a detention center housing asylum seekers and refugees.

Djokovic has previously expressed his opposition to mandatory Covid-19 vaccines, saying he was personally “opposed to vaccination” during a live Facebook chat. He contracted the virus in June 2020, but since then no reinfection has been reported.

The controversy comes as Australia faces a growing epidemic, having reported a record number of new cases daily for several consecutive days.

Tournament organizers said earlier that the Serb, who was trying to break the record for most men’s Grand Slam titles, had received a medical exemption to participate in the prestigious tennis tournament.

The exemption sparked controversy when Djokovic visited Melbourne on Wednesday.

According to Australian media The Age and The Sydney Morning Herald, the Australian Border Force (ABF) contacted the government of the state of Victoria after learning of a problem with the visa submitted by Djokovic’s team while he was on the way to the country.

The ABF confirmed in a statement that the 34-year-old’s visa was revoked for failing to provide proper evidence for entry into the country.

“The Australian Border Force will continue to ensure that those arriving at our border comply with our laws and conditions of entry,” the statement said.

After the decision was confirmed, Morrison tweeted that Djokovic was subject to the same rules as everyone else. “Rules are rules, especially when it comes to our borders. No one is above these rules. Our strict border policies have been essential to ensuring Australia has one of the lowest death rates in the world. world because of Covid, we continue to be vigilant “, he wrote.

Players have been told they would need to be fully vaccinated to participate or qualify for a medical exemption granted by a panel of independent experts.

The vaccine exemption sparked a reaction in Australia.

Victorian Deputy Liberal Leader David Southwick called the decision allowing Djokovic to participate in this year’s tournament “a shame”, describing it as a “kick in the guts to every Victorian” who endured months of confinement and suffered personal setbacks during the pandemic.

He told Serbian radio B92 that his son was staying in a room where no one can enter, with two policemen in front of the room.

“I have no idea what’s going on. They’re holding my son captive for five hours,” Srdjan Djokovic said in a statement to Russian news agency Sputnik, according to B92. “It’s a fight for the libertarian world, it’s not just a fight for Novak, but a fight for the whole world! If they don’t let him go in half an hour, we will gather in the street . It’s a fight for everyone. “

Since the comments were made, no gatherings have been reported in Belgrade or outside Melbourne Airport.

Earlier on Wednesday, Djokovic’s coach Goran Ivanisevic posted a photo on social media of what appears to be the Melbourne airport in Australia where Djokovic was allegedly detained, captioning: “This is not the most usual trip to Australia “.

Djokovic has expressed his opposition to compulsory vaccines against Covid-19.
â€œPersonally, I am opposed to vaccination and I would not want to be forced by someone to be vaccinated in order to be able to travel,â€ he said in a Facebook live chat, according to Reuters.
But in May last year, Djokovic said vaccination was a matter of personal choice: “I will keep the decision to myself whether or not to get the vaccine. It is an intimate decision, and I don’t want to go into it. that game of pros and cons of vaccines, which the media are unfortunately creating these days. “

At a press conference on Wednesday, Tennis Australia CEO Craig Tiley defended the impartiality of the medical exemption review process, telling reporters: “No one knew who the claimant was.”

Across Melbourne, one of the world’s most closed cities in 2021, tennis fans have taken to social media to post calls for a “boycott” of the Australian Open.

The backlash against the exemption comes after Melbourne residents spent more than 260 days confined to their homes, banned from leaving except for groceries or other essentials, mostly over two long periods from July to October 2020 and from August to October 2021.
Australia started 2022 with a record number of new Covid-19 cases due to a growing epidemic centered in the eastern states.

New South Wales, the most populous state, and Victoria – home to Melbourne – both released a record number of daily cases on Saturday, according to figures from the Department of Health.

Under the current guidelines of the Australian Technical Advisory Group on Immunization (ATAGI), a medical exemption is granted to people with an “acute serious medical condition (for example, undergoing major surgery or hospitalization for a serious illness). ).

The remaining grounds for medical exemption relate to people who have suffered a “serious adverse event attributed to a previous dose of a Covid-19 vaccine, with no other identified cause” and a vaccinee who “constitutes a risk to themselves or to others during the vaccination process “, due to an” underlying disorder of development or mental health “.

Finally, exemptions can be granted to any person presenting a “SARS-CoV-2 infection confirmed by PCR, where vaccination can be postponed for up to six months”, and in cases where individuals have received “an anti-monoclonal antibody. -SARS-CoV-2 or convalescent plasma therapy. “

“It’s ultimately up to him to discuss with the public his condition if he chooses to do so and why he received his exemption,” Tiley said.