Area Trade Reports
Chinese exports were likely up about 15% year-on-year in July as shipments for the winter holiday season were sent out in advance to avoid port congestion issues. Imports, on the other hand, are expected to pick up moderately as domestic consumption picks up.

Meanwhile, Taiwan’s trade figures are also expected to rise, but weak industrial production points to a possible slowdown in growth in the coming months.

Trade data from the Philippines is also slated for next week and we are likely to see recent trends continue. Exports are expected to post modest gains while imports are expected to record another strong double-digit increase due to inflated energy imports. The trade balance will likely widen to $5 billion, indicating renewed pressure to depreciate the peso.

China inflation release, bucking regional trend
Contrary to the strong price acceleration in the region, CPI inflation is expected to pick up slightly in China, while PPI inflation could slow to 5% y/y from 6% in July, raw materials having fallen due to the slowdown in real estate construction activity.

Philippine GDP in Q2 to maintain recent momentum
Also on deck for next week is the second quarter Philippine GDP report. Election-related spending is expected to lift growth to 8.8% year-on-year, with household consumption getting a further boost after mobility restrictions eased in March. Better growth prospects coupled with above-target inflation indicate that Bangko Sentral ng Pilipinas will remain hawkish for the rest of the year.

Other key reports coming out next week: China loan growth and Korean labor data
Other important data slated for release in the coming days are China’s bank lending figures and Korea’s employment report.

China will release monetary data next week and we expect a more moderate recovery in loan growth for July. This would be a slowdown from the June jump as the People’s Bank of China tightened liquidity after mid-July. 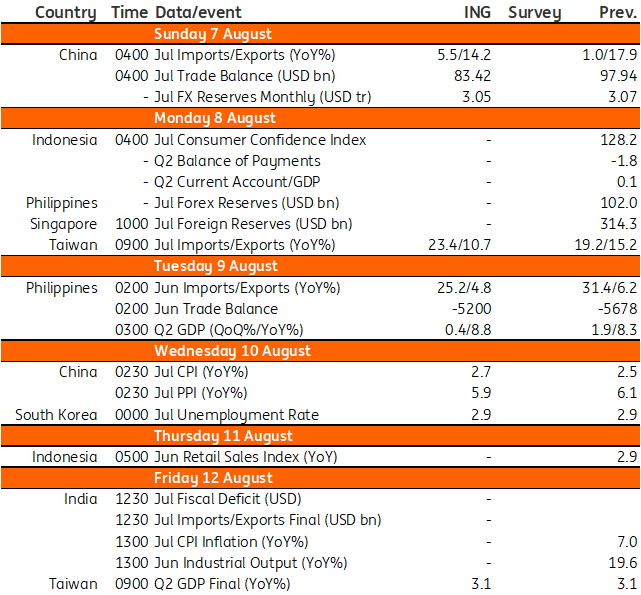 How to Create a Basic Survey in Microsoft Word