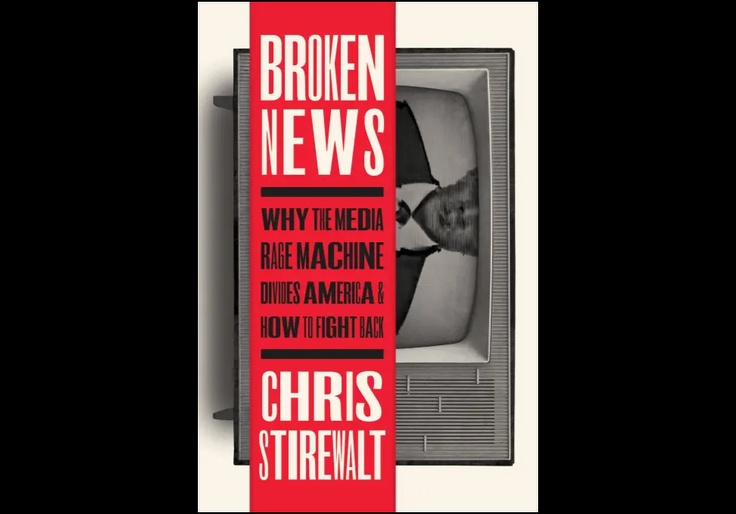 In August, researchers writing in the journal Health Communication reported the results of a study on media consumption habits. In results that won’t surprise anyone who’s spent five minutes on Twitter, they found that Americans who engaged in “problematic media consumption” – that is, excessive amounts of news viewing online, in print and on television – were suffering harmful effects. effects on mental health as well as disruptions in sleep and their personal interactions with others. “While we want people to stay engaged with the news, it’s important that they have a healthier relationship with the news,” one of the researchers noted in a press release.

Fortunately, Chris Stirewalt is here to help. In Broken News: Why the media rage machine is dividing America and how to fight back, the former Fox News Channel political editor and current Fellow of the American Enterprise Institute offers a much-observed and sometimes hilarious journey through our contemporary media ecosystem, with a particular focus on how Americans have helped build and participate now happily to the operation of “rage”. machine” from the book’s subtitle. (Full disclosure: I recently became a colleague of Stirewalt at AEI.)

For a book about an industry torn apart by political strife, broken news is pleasantly free of partisan cants. In fact, Stirewalt points out that the issues facing journalism impact across the political spectrum: “What is wrong with my calling and the industry I work in hurts Americans on the left, right, and center. “, he asserts.

Why are we so angry and polarized? Stirewalt traces the shift from print media to radio, television and the internet and the challenges these different modes of communication pose to civic health. He describes how these developments have contributed to the growth of national media, often at the expense of local news. And he is a passionate advocate for the importance of healthy media to American life. “The American creed requires written words and a common culture to understand them,” Stirewalt argues. Today, however, “much of our information is not intended to convey ideas, but to generate powerful feelings – often fear, anger and resentment”.

Stirewalt reminds readers of the historical moments when these changes happened, like the radio journalist who said “oh, humanity”, while describing the Hindenburg disaster. “The listener is not connected to the event itself, but to the reporter’s reaction to the event,” Stirewalt notes. Accordingly, “the consumer of information passively receives emotional significance”. We remember the emotional reaction as much if not more than the event that caused it.

This is because emotion sells, especially fear, anger, anxiety, and hate. “The hatred people feel for their fellow Americans is not just a byproduct of political coverage,” Stirewalt argues, “but a necessary component to making much of that coverage profitable.” Media institutions are now working to “optimize anger,” as one author described the transformation in the tone of coverage offered by the Washington Post during Donald Trump’s presidency. Stirewalt rightly criticizes the mainstream media for their initial flirtation and ultimately masochistic embrace of our former president; Fifty Shades of Donald Trump has proven too lucrative and salacious a franchise for media companies to resist. “Ronald Reagan and Bill Clinton were both good on television,” writes Stirewalt. “Trump has been television.”

“Balanced and detailed information is hard to do, expensive and often boring,” Stirewalt reminds us. “Tribal outrage is easy, cheap and entertaining.” It’s also deeply appealing to the most basic human instincts, and we’ve perfected technologies and platforms that make its expression seamless. When people log on to Twitter, they undoubtedly see themselves as thoughtful, rational Lockeans. But as soon as they see a provocative Tweet from a political opponent, they go to the land of Hobbes.

Stirewalt has first-hand experience of the consequences of this new style of journalism. He was fired from Fox News after calling the decision desk that Joe Biden won Arizona on 2020 election night. Fox News viewers and even Donald Trump protested loudly on social media about the call, even if it was the right one. “Fox viewers had become even more accustomed to flattery and less willing to hear news that defied their expectations,” he notes, with admirable serenity toward his former employer.

Stirewalt describes other contributing factors to our broken media institutions, such as the decline in power of respective political parties, which exacerbates partisanship, as well as how the media rewards the pursuit of glory by so many of our elected officials. “If Rep. Alexandria Ocasio-Cortez really wanted to raise taxes on the rich, she wouldn’t do it by writing ‘tax the rich’ on her rump and going to the Met Gala,” Stirewalt notes. “But if she wants to be famous of wanting to raise taxes on the rich, then she’s on the right track. It’s also a bipartisan affliction, as the careers of Rep. Matt Gaetz and Rep. Marjorie Taylor Greene demonstrate.

Throughout the book, Stirewalt rejects journalists’ efforts to practice “post-journalism”, which focuses on generating emotional responses (and attachment) from users and a sense of group identity. based on shared values ​​rather than reporting the facts. Its close cousin is “moral clarity” journalism, which argues that journalists should abandon objectivity for the larger goal of writing stories that advance whatever social justice causes they want to champion.

I would have liked to hear more of Stirewalt’s thoughts on the impact of cultural trends on what people expect from the media. We have raised several generations of Americans who believe that life can and should give them what they want on demand and who believe that their opinion matters in everything (but who also believe that any challenge to what they say is a form of abuse). Twitter makes everyone its editor of editorial pages, all day, every day, in real time. The endless opportunities to chat online have obviously not strengthened our union’s bonds, but we continue to spend a lot of time on it.

As for the solutions, Stirewalt offers several excellent ones; call them the Stirewalt reporting rules, and if you’re a budding journalist, memorize them. I would sum up the best of them as follows:

Journalists should take the practice of journalism more seriously, and themselves much less.

The hands-on experience of reporting on the mundane details of city government is far more valuable than fanciful pursuits like “moral clarity” journalism. Practice, not theory. Report, not opinion. Facts, not overly emotional apocalypticism.

Strengthen local news coverage. Resist the temptation to view every issue and idea through a national news lens. Reporting on what is happening in places too often ignored by coastal elites and mainstream media. If all politics is local, then more journalism must also be local.

There are many other lessons buried in this wonderful book: Journalists should stop relying so much on anonymous sources. News consumers should stop demanding that political reporting sound like a real housewives altercation. Journalists should stop acting like meat renderers, pick up the carcass of partisan politics in search of usable scraps, and instead pursue the ideal of objectivity, even if they fall short of it.

And, above all, don’t make everything political. This path leads to moral impoverishment.

George Orwell hovers as patron saint throughout the book, and Stirewalt cites him as a warning of the dangers of an information environment where lies are accepted as truth. Stirewalt is more optimistic than Orwell, but his message is just as important: we cannot abandon journalism to the forces of cynicism and anger. We need it. We need a healthy media environment because when journalism is done well, it serves an important civic purpose. It reminds us that despite our differences and our disagreements, we must find a common purpose, a common history – only then can we fully appreciate the remarkable freedoms we enjoy.

Broken News: Why the media rage machine is dividing America and how to fight back
by Chris Stirewalt
Center Street, 256 pages, $29

Christine Rosen is a senior fellow at the American Enterprise Institute and media columnist for Comment magazine.